“Say it with Flowers? Nah. If you really want to get your expressive point across, say it with music.”  –  Robert Greenberg-  composer, pianist and music historian

Agreed, but not to worry, we added flowers too! 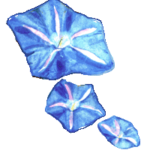 What began as fulfilling a “self-made” promise to create music welcoming a new baby, celebrating a new generation of parents and offering a family legacy piece to share, became an expansive soothing lullaby and dream sequence soundtrack.

Songwriting partners and family members Debye Delorean Kerbey and Alan Kerbey invite you to the story.

The original lullaby composition was crafted around a recurring-themed piano and strings arrangement, accented by the Ancestral “AH’s” choir and delicate “star wink” chimes.

Plus, an extended “soundscape” instrumental derivative of the lullaby along with pieces of the well-loved “Dream Weaver” melody, connect with the lullaby to provide a additional 30 minute continuum to sleep.

The collection of original verses for each month of the year were written to express parents’ and family’s feelings of joy, and eagerness to share the refuge of Earth, Sky, our Hearts, Traditions and Home.

We imagined a life with you, now let’s create one together.

A soothing, classically-themed melody with a lush instrumental interlude is the constant familiar, providing the soundtrack for monthly lyric variations and seasonal sound effects. 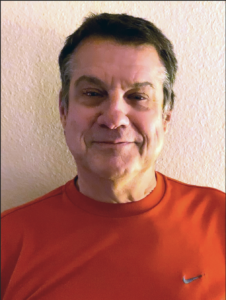 Alan Kerbey has been making music pretty much all of his life. A multi-instrumentalist, singer, songwriter, producer, arranger, Alan became a “home recording studio” engineer in the very early days of that particular revolution. Alan is always writing and recording his own material as well as producing others, and recently retired from media ministry at a Mega church in Phoenix. Alan and Debye met in 1986 under the beginning of writing commercial jingles, but quickly their efforts went to collaborating on songs for an album to be shopped to major labels. 35 years later, they are still writing together. In 2010 after Alan had his first grandson and Debye was anticipating her first (both of whom were February Babies) the “My February Baby” lullaby was conceived by these songwriters and family members, Debye married Alan’s older brother in 1988. The musical concept of the lullaby was born – along with the growing family! Alan is Director of Media for the Dream-a-Month team, putting all of his skills past and present to good work in what is more of semi-retirement. Alan lives in Phoenix, with his very talented musician wife Therese. He is an avid golfer, spends as much time with his children and their littles as possible and could be the greatest Beatles fan ever!

Don Sanni
Music Contributor“Don Sanni is one of the most versatile and talented guitarists I have ever had the good fortune to perform with. How great it was to have Don accept the gig to create some acoustic guitar work and offer some of his own compositions to the Dream-a-Month growing music catalog. “ Debye Delorean Kerbey Don is a New England guy and a graduate of The New England Conservatory, with a degree in guitar performance. Over the years he has contributed his lauded guitar style to many live performances, won national guitar competitions and had a sponsorship with the Kramer Guitar company.  Don has been a full time guitar teacher in the Nashua, New Hampshire area for almost 40 years. His business,  The Don Sanni School of Guitar, has upwards of 50 students per week working at various skill levels of guitar and bass performance. He continues to perform private events upon request. Enjoy a sample of the Dream-a- Month Don Sanni performance collection of  “In Season” Glow Blossom Trees. A full download to purchase is available in our SHOP.

I’ve discussed the music as the ignitor; the dream-a-month spark. I have a songwriting tool kit “muse”, if you will, that I refer to as “Song Sparking”.

I confess I do love every month of the year equally. Every month has cause for celebration, appreciation and seasonal wonder. When I found out that my first Grandchild would be born in February, and close to Valentine’s Day I really began to consider all of the notables in February, as the muse; the song spark.

As I imagined this new life in the world, I pictured a beautiful space all around him, that I knew his parents and extended family would aspire to bring in close and share; the Earth and Sky, our Hearts, Traditions and Home. The visual fantasy scape that filled the lyric images as I was writing felt all at once old and modern.

The image of home became a place where generations that had come before ours had their beginnings, which in turn brought into being all of our own dialogue with the outside and inside world. The surrounding lyrical landscape “outside” was developing to reflect ideas of creating a home and recalling a connection to a personal childhood place.

When Anne and I first talked through the visuals that she would design to become the Dream-a-Month fantasy made real scape, we agreed to allow the lullaby music to “spark” the process and from there, the outside inside lullaby lyric world was born. 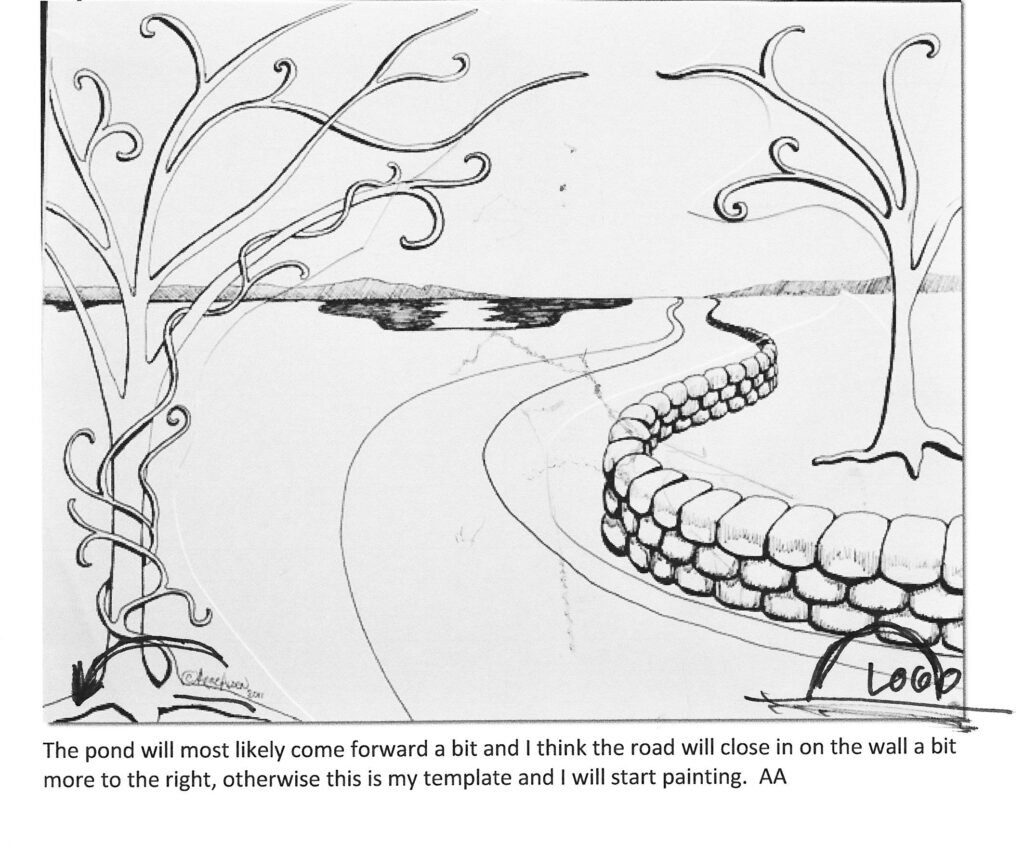 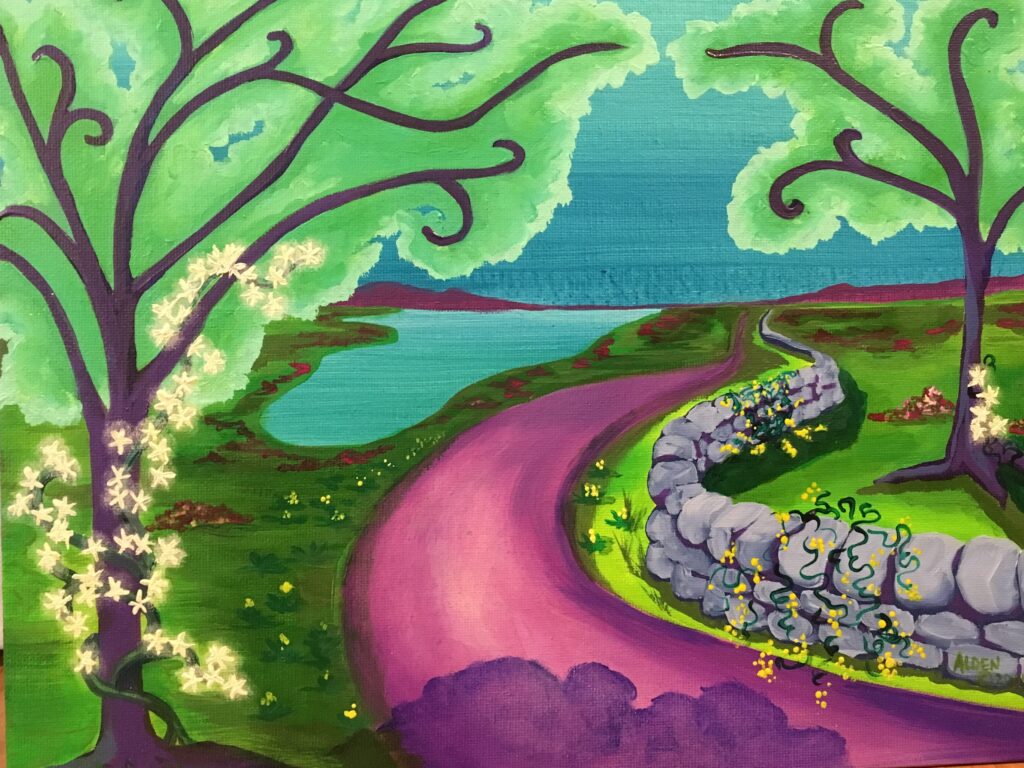 We started with the month of February 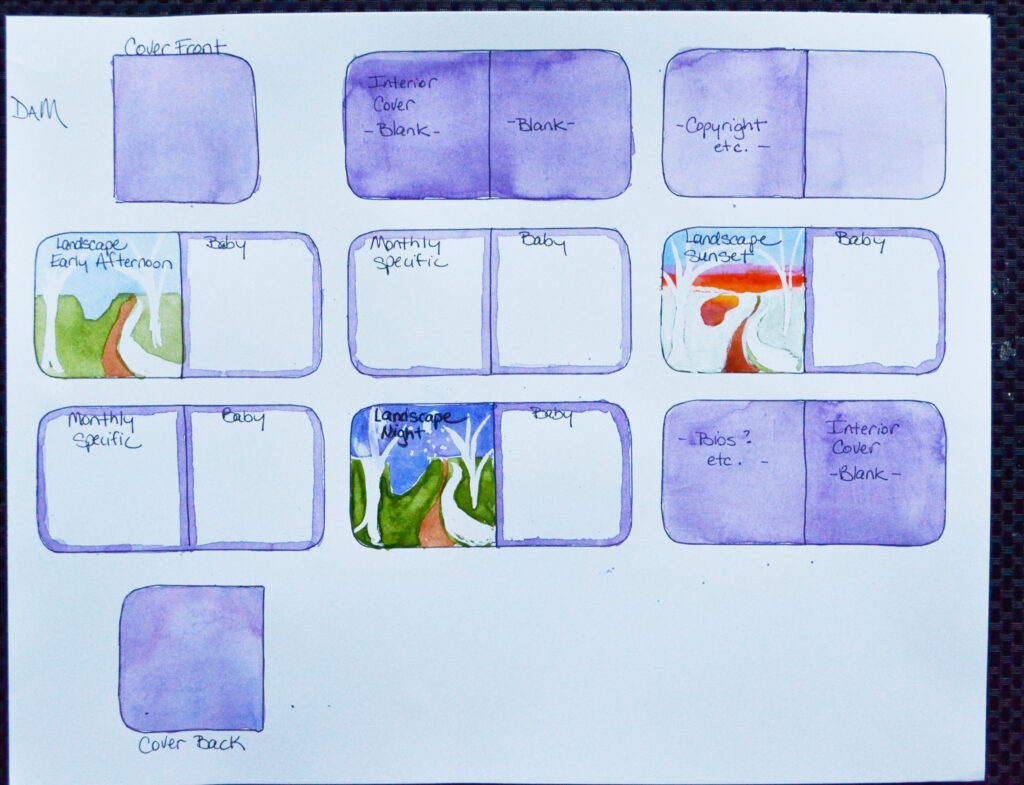 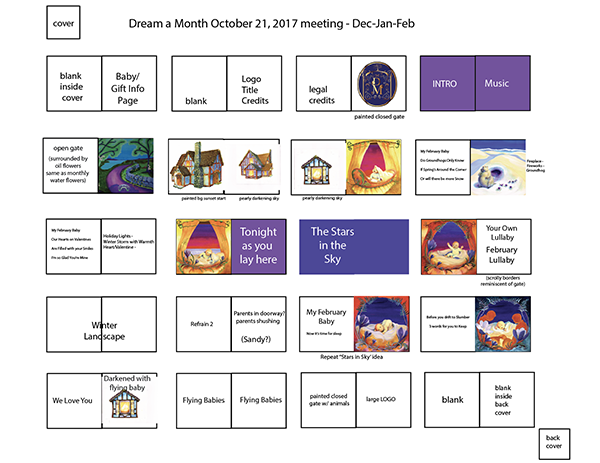 The qualities of light; moonlight, rising and setting sunlight, firelight, artificial light, and the reflective surfaces they embrace have always driven my art. Whenever an opportunity arises for me to play with light, I am on it, and especially the juxtaposition between them all. Makes me happy.

p.s. I’m talking about painting light, not photographing light. I am able – just able – to take some good shots when they present themselves to me, but I am not very good at it. Too fussy. 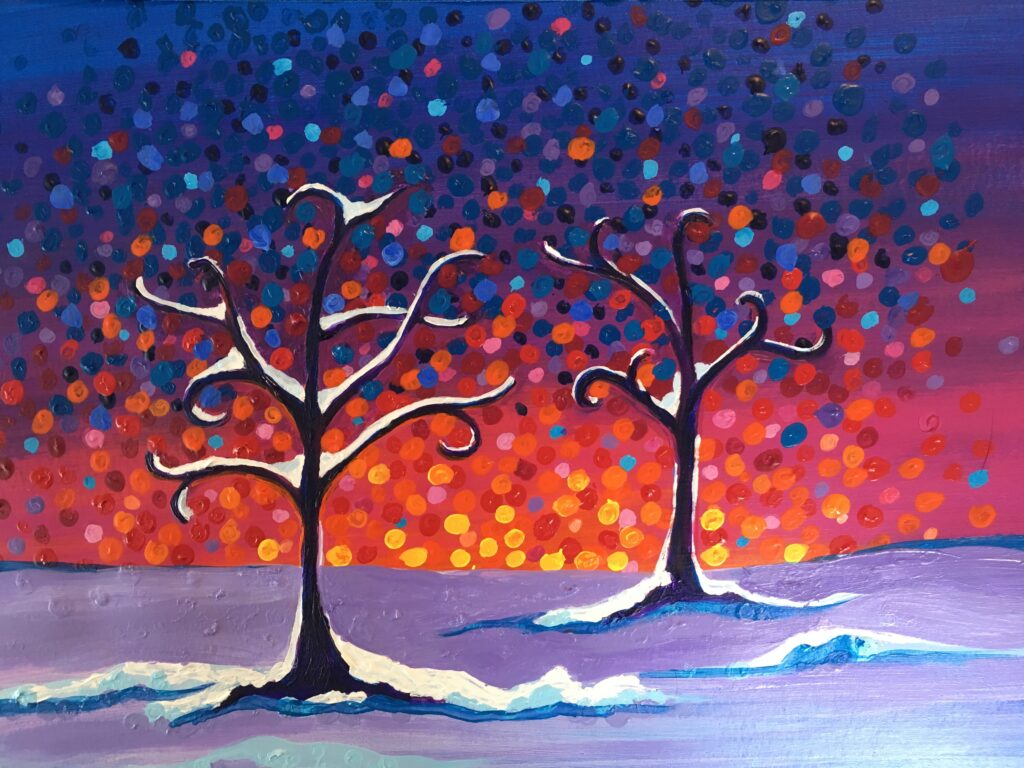 Playing with pointillism for light enhancement. Lovely, but too distracting for this project. Anne 2016 Acrylics

Painting right next to my computer to keep it all in perspective. I was painting 3 canvasses at a time to capture the progressive, darkening sky. My husband made this platform for me.

I used Adobe PhotoShop for image manipulation and digital painting, Illustrator to place the PhotoShop images into pages and also add quite a bit of vector art, and InDesign to place all the pages within the books.

Towards the end of the process, I reviewed the book layout in InDesign, modified or replaced individual pages using Illustrator, and touched up my digital painting in PhotoShop.

Stand back! I am cooking here! 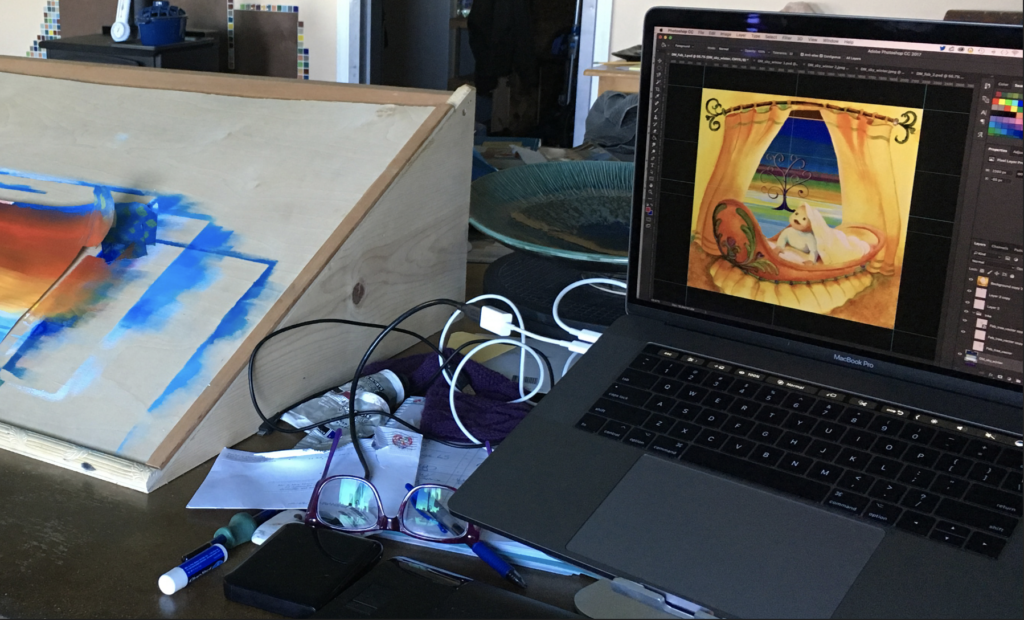 Painting, photographing, then placing traditional art within the digital art. Interesting process. Fun because when I burned out on the computer, I just moved my seat to play with paints and make a mess. (No electronics were harmed in this process)…

Yes, I could have done *something similar* digitally, but the textures with reflective light qualities from the canvasses would have been lost. 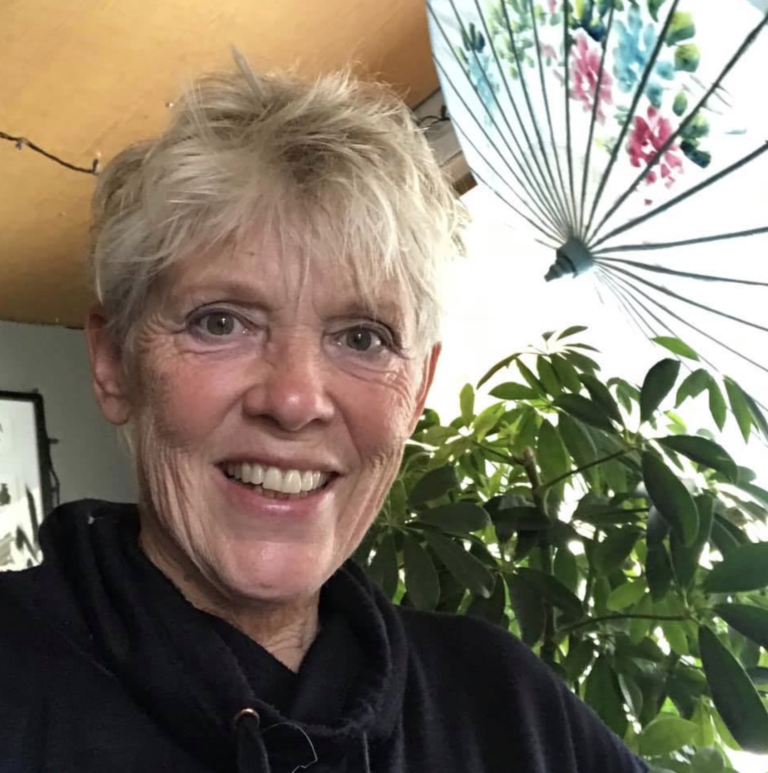 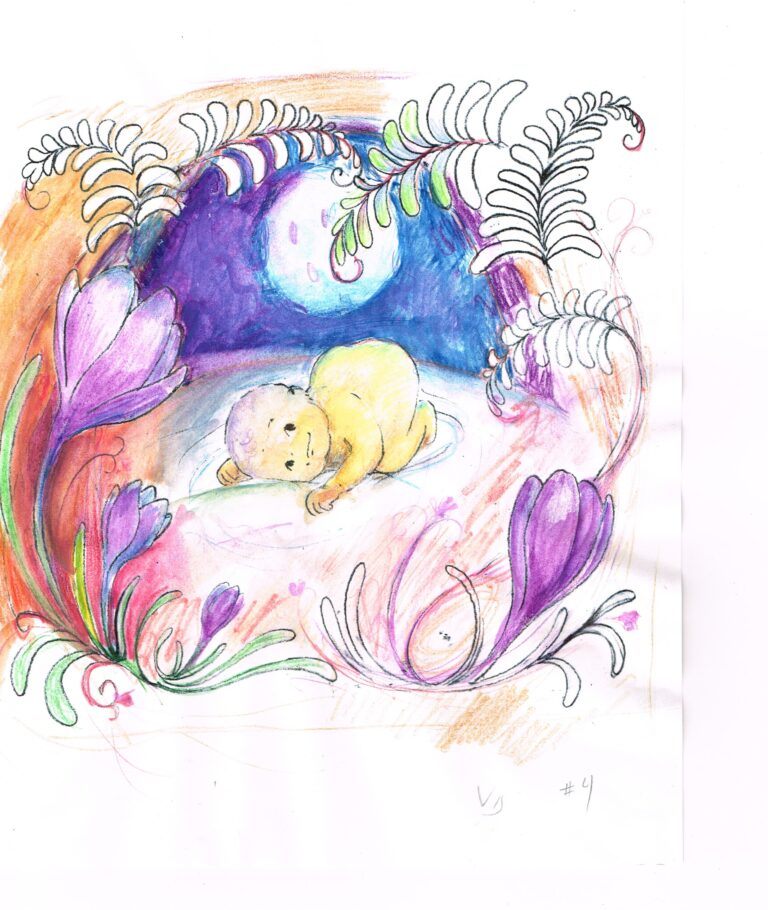 There was no doubt in my mind that the babies needed to be painted with watercolors. Unfortunately, I am an unsuccessful watercolorist. I require a medium that allows me to paint over and over and over.  But I knew someone who was just the right person.  – Anne

Sandra Craze Ramsey is a well known and appreciated fine artist in the Seattle area. I consider her a master artist in paint, but she excels in any medium. Serenely beautiful and many times evocative, her works include portraits,  landscapes, seascapes, florals and fantasy art; on canvas and murals and anything that will hold paint.

As a member of a large, creative and industrious family, she can build just about anything. Sandy is always willing to “give it a go”. When I met her, she was refurbishing a small bungalow, from foundation to roof and everything in between. And making amazing art all the while.

Sandy was integral in getting me involved in the local artist community, which opened my heart to many ideas. I loved talking with her, since her take on many things was always open minded, sometimes brutally honest and always from a new perspective.

Even though I have moved away, I always think about her and am so pleased that she was part of our journey. 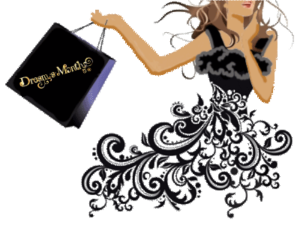 Now that you’ve got the whole story, perhaps you’d like to shop!